Expecting?
Well with the good news would have come that nagging feeling of nausea and bouts of vomiting!

Pregnancy brings about a number of changes to your body — swollen ankles, sore back, and constant pressure on your bladder. But for many women, nausea, or morning sickness, can be the most unpleasant symptom of the entire 9 months.

The term “morning sickness” is also a misnomer! Whoever put those two words together really got it wrong! It’s not uncommon for that sick feeling to persist well into the afternoon or evening making “morning sickness” feel like “all-day sickness”.

Most of pregnant women face this problem but probably don’t understand it well. And it is important that our family and support system is also knowledgeable about it as that helps women cope better with morning sickness. 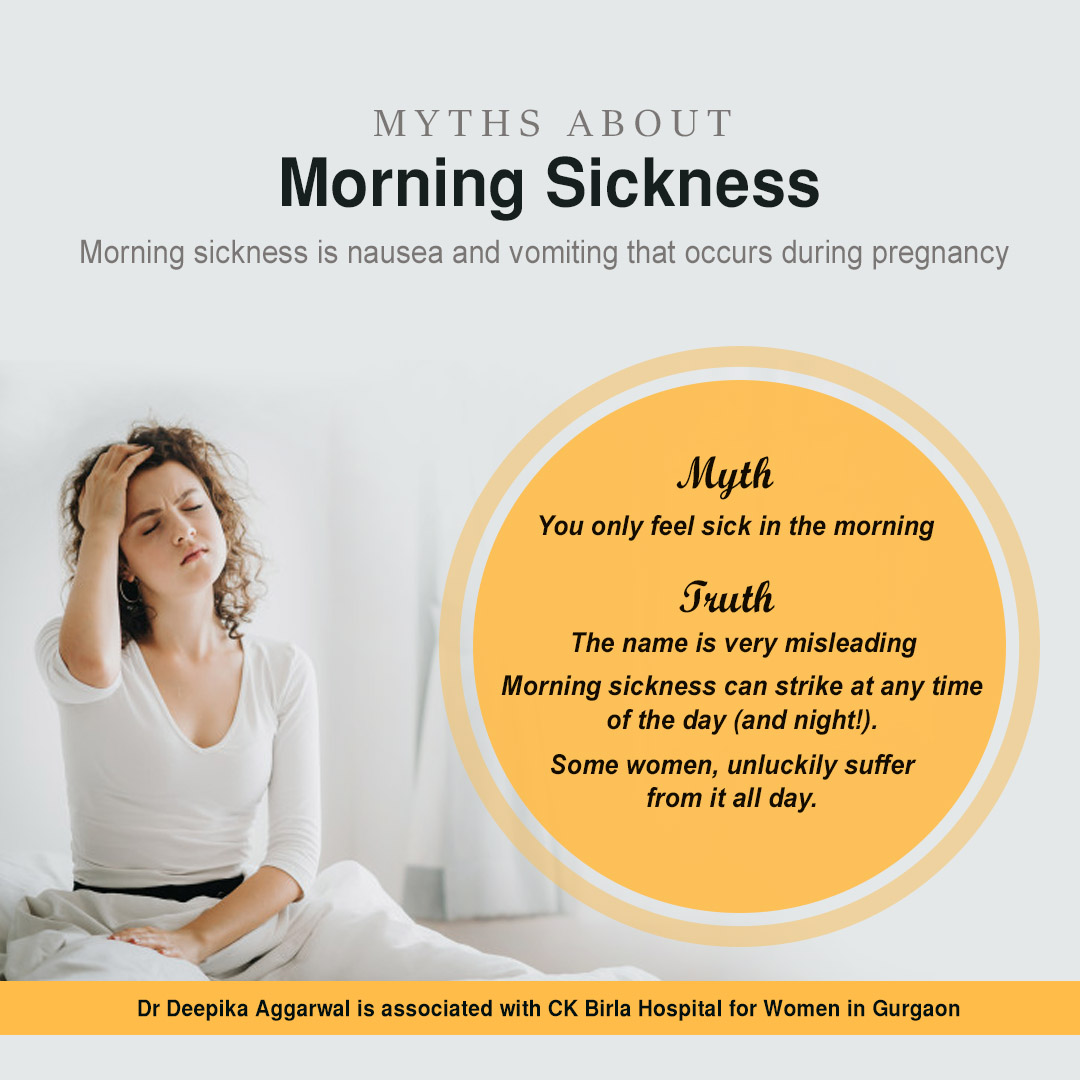 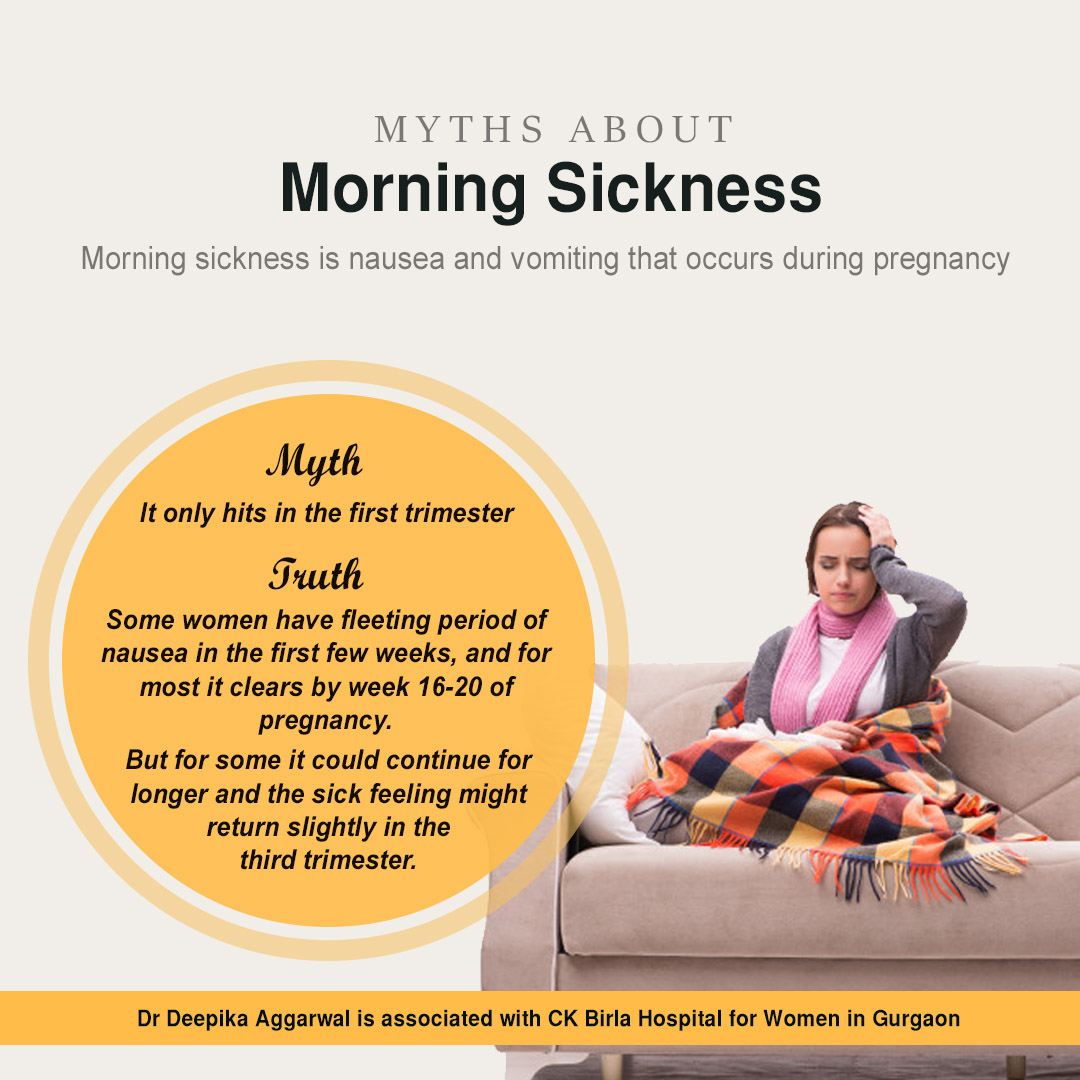 While it is true that morning sickness is most common during the first trimester and usually begins by nine weeks after conception. Symptoms improve for most expectant mothers by the mid to late second trimester.
BUT
For some women it could continue for longer and the sick feeling might return slightly in the third trimester.
AND
For those suffering from Hyperemesis Gravidarum (HG) it could well continue throughout the pregnancy. Read more on HG here. So, to generalise that it happens ONLY in the first 3 months of pregnancy would be incorrect.

There’s no one cause of morning sickness during pregnancy, and the severity varies among women. Increased hormone levels during the first few weeks of pregnancy are the most common cause. Reduced blood sugar is another reason for morning sickness.

Other factors than can worsen morning sickness include: 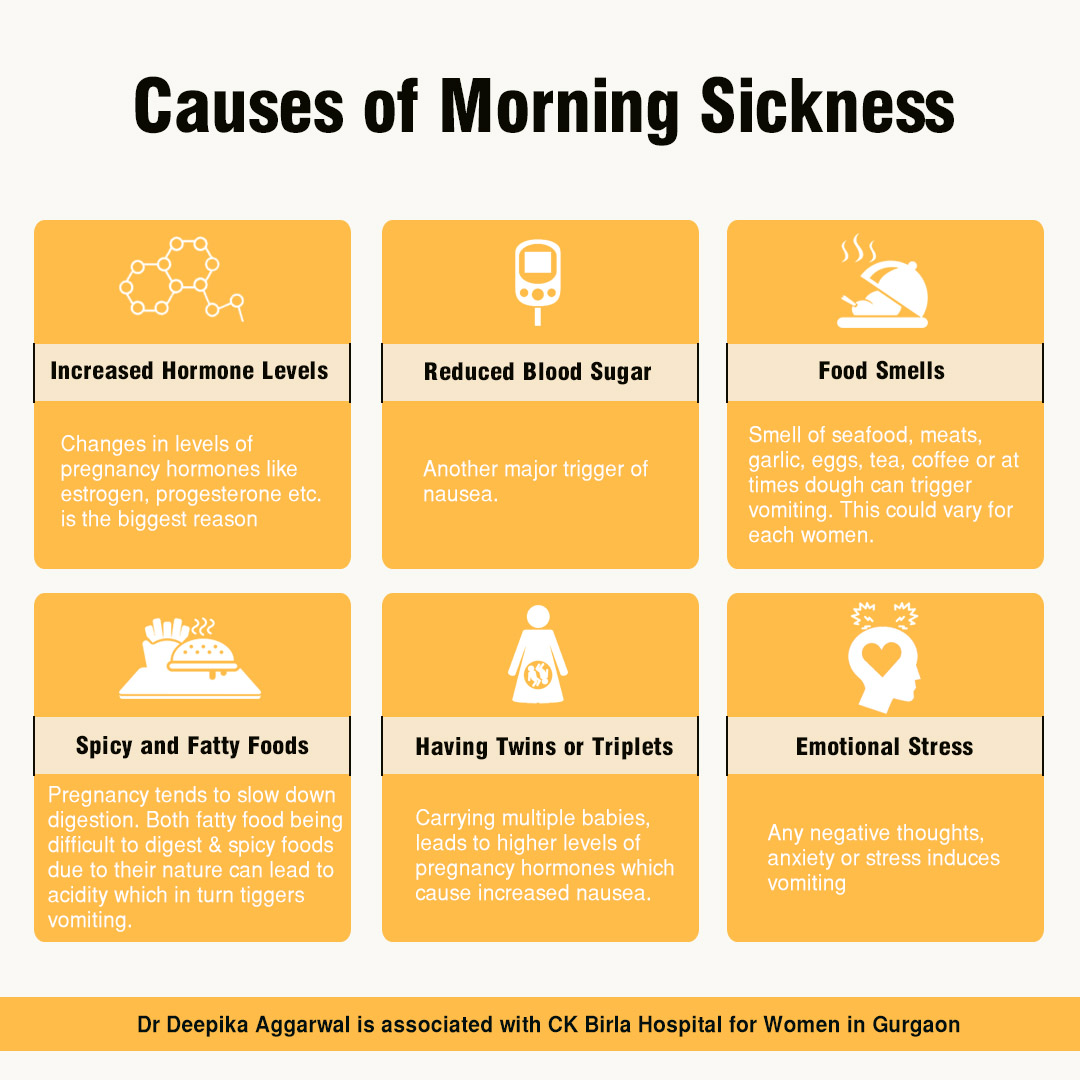 In a lot of women it is seen to be triggered by certain odours, spicy foods, heat, excess salivation or — often times — no triggers at all! The odours and foods that cause nausea would vary from woman to woman. 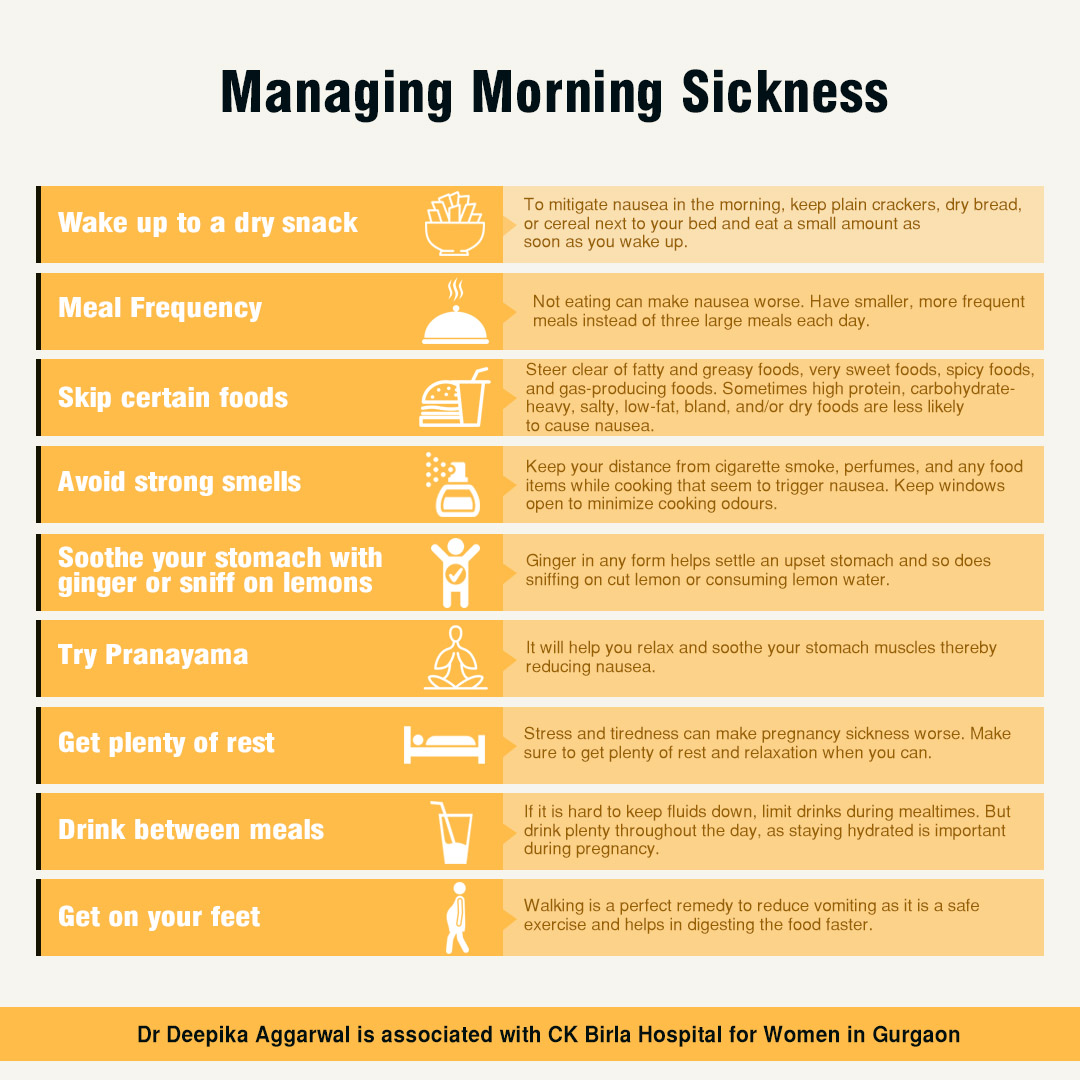 Morning sickness and its triggers also vary between pregnancies. While one may have had severe morning sickness during one pregnancy, in future pregnancies it may be very mild and the reasons could be totally non-related. NO RULES APPLY HERE!

Above are a few tips that would help you cope with morning sickness. Some things may work for you and some might not…you have to try and see what brings you maximum relief.

None will make nausea go away but some will definitely help alleviate the problem.

With morning sickness the thought of eating seems to be the worst idea in the world. Women often don’t eat because they worry it’ll make the nausea worse, But, in fact, the opposite is true.

There are certain foods that can help relieve the symptoms, even though temporarily! Bland foods — such as crackers, dry cereal are gentle on your stomach. Reaching for bland foods first thing in the morning may help ease your nausea symptoms. Some women have also found relief from nausea through cold treats, such as watermelon, popsicles, or pickles. You can keep these handy for a quick grab when needed.

It is important that you keep having something…focus on small frequent meals rather than 3 large ones. 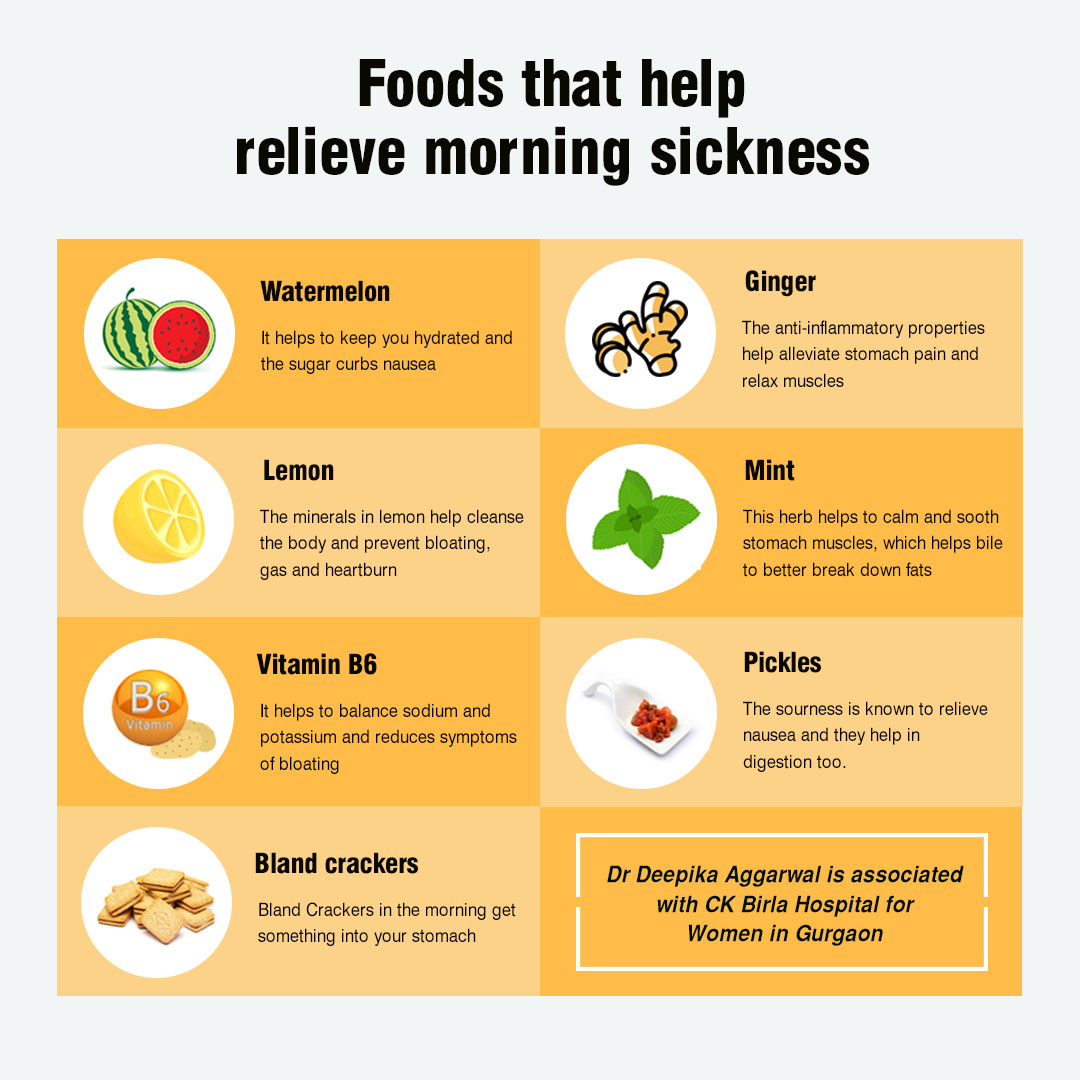 There’s no way to completely prevent morning sickness. However, avoiding triggers such as strong odours, excessive fatigue, spicy foods and foods high in sugar may help.

Remember is that this annoying symptom is only temporary. Eventually, your appetite comes back and you should be feeling better. Keep your head up and don’t stress too much.

Rarely, morning sickness is so severe that it progresses to a condition called Hyperemesis Gravidarum. Hyper means ‘Excessive’ and emesis ...
Read More